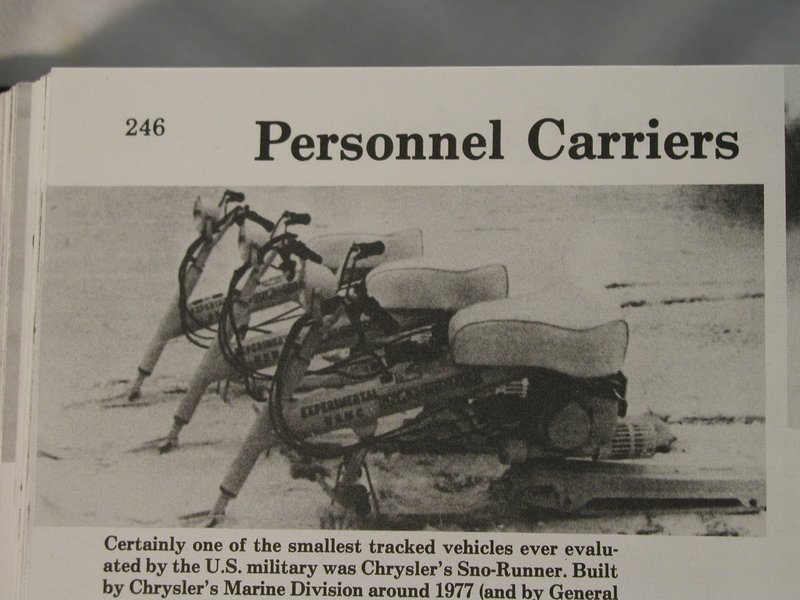 One story I heard goes that the snorunner started as a military vehicle.The army wanted a snow vehicle that was light weight and had a range of 30 miles to transport a soldier. So they paid Chrysler in 1977 to make one including all the dies and development of it. So Chrysler came up with the snorunner, The story goes that the military version could go 35mph, a friend of mine had one with dual carbs.The military checked it out but they didn't want it because it couldn't go in powder snow, so in 1979 Chrysler offered it to public. They first detuned it to make it go slower by adding a extra thick head gasket. You could buy a new one in 1979 for $900. In 1980 things were near bankruptcy at Chrysler so in 1982 Chrysler quit selling them. They had about 4000 left so they sold them all to COMB liquidation and they changed the name to snorabbit by putting a snorabbit sticker right over the snorunner sticker they sold them for $288.00 each in the back of magazines. The remaining parts were also sold. The people I talk to think there was between 28,000 made, we will probably never know.

Here is another story sent to me with a picture:

Interesting photos. I’ve attached one of my photos. The second photo does look similar to the Echo bikes I have but the frame is different. It has a smaller steer tube and is at a much steeper angle than the Echo. The story is interesting and I’m not in a position to dispute it. Here is my story I got from the Service Director at Echo who was on the snow bike design team back in the early 70’s for Echo.

Apparently this fellow who had a patent right to the design of these snow bikes asked Echo USA to market snow bikes with royalties going him. The problems they had were Three fold.

So the heads of Echo power equipment in  decided that these issues were not worth the effort to market the bikes in . They had at that time built a few thousand of them. So they collected what they had and disbanded the project and sold half in Europe and the rest in . The patent holder went to Chrysler with his design with hopes of higher production numbers and I guess the rest is history.

Reading the attached story sounds very creditable. Is it possible that both happened at the same time? They both share the same platform.

I did find the tail about the fellow towing a disabled snowmobile with the Chrysler snow bike a little bit of a stretch. There is no way a snow bike with a 3” width track and 10hp pull a dead 400lb snowmobile though the woods with 220lb rider to boot.

This is a picture of the echo snowbike which is similar, with a smaller engine, no brakes or light, but the skis and track are the same 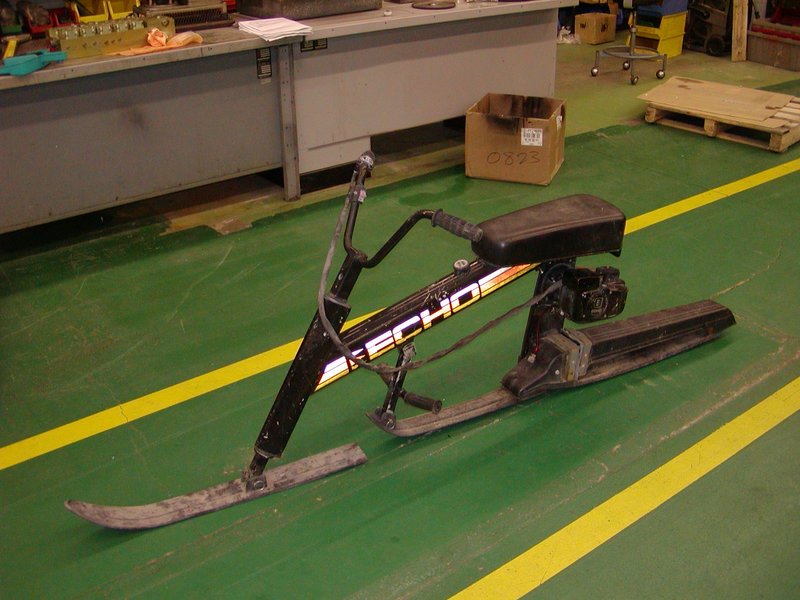 A Person emailed me this story:

7-3-04 Out of the blue this evening, I thought I'd do some searching to
see if these things were still around... and to my pleasant
surprise I found all sorts of little tidbits online.

My father, Steve Quick, was the engineering project manager for
the "Snow-Bike" (as he affectionately called it) at Chrysler in
the mid-late 70's.  I have been searching in local papers listings
trying to find an old "snow-bike" just for keepsake purposes
since my dad passed away about a year ago.  I now see, that I
have been searching for the wrong thing - as the name is
actually "Sno-Runner."  All these years, the family has known it as the "Snow Bike." 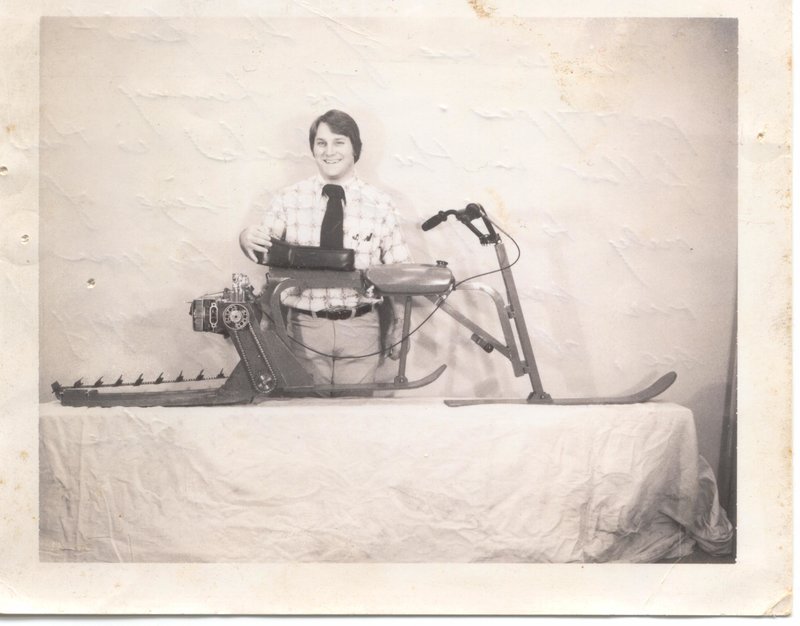 My sister and I have been sorting through all of dad's old things.  We came across an old parts catalog and some pictures of
the first prototype units at Chrysler... and some even taken in
my parents' back yard.

I see that you maintain an entire business on keeping these
things running for fans around the country, and I'm wondering
if you might have one for sale.  I'd love to get my hands on
one, as I was just born the first few years they were on the
market.  For whatever reason, Dad never purchased one to keep for himself...
This is something which we never really understood, as this project was
the pride and joy of his career.  Oh, and that guy on the snow-bike in those familiar
"Chrysler '81" full-page advertisements is actually my dad :)

Seeing as the one-year anniversary of his death is coming up
(Sept 13th), the emotions are running particularly wild.  To be
able to have a working unit in our posession would really mean a lot to my sister and I.  I hope you can help out!

I also read your history description on the website.  In all the
stories that we've heard over the years from Dad, the initial
startup never had anything to do with the military.  It was
actually Chrysler's last-ditch attempt at trying to prevent
bankruptcy - with project initiation in 1975 (just 6-8months after my dad was hired).  He had mentioned military involvements, but certainly not to the degree of which
is mentioned on your website.  From what we've been told, Chrysler was originally marketing this for the consumer market. Chrysler's management team was dead-set on getting production started by a given date.  The problem was, that the muffler
design hadn't yet been done/tweaked.

A very restrictive, poorly designed one had been used in testing
that cut horsepower 30%.  For the midwest (Chrysler's
origination - Hartford, WI), the quenched horsepower didn't have
a drastic effect on performance (so said management).  My dad
had pleeded with management to give the design team 2-3 more
weeks to get production set up on a more adequate muffler
design. As often happens, management was more interested in
meeting deadlines than creating a good product.

So, after performing exceptionally well at a nationwide
snowmobile expo in Alaska, the dealerships fell in love with the
little Sno-Runners.  My dad actually towed a full-size Yamaha
sled out of a wooded area, back to home base during an "obstacle
course" race. The Yamaha sled driver had crashed into a tree
rendering the sled immovable.  My dad (good size, weighing in at
around 225lbs), with the Yamaha driver sitting on the back of
the snowbike, behind my dad, pulled the full-size sled all the
way back to base-camp.  This really opened the eyes of the
buyers... and opened HUGE doors for Chrysler sales.  Dad
actually would have won due to the incredible mobility and sharp
turn handling the the bike demonstrated compared to the large
sleds.  Dad was wizzing right by all of the larger sleds as the
drivers would have to get off them to physically pick them up
and move them in order to make sharp turns through the trees. It
looked like Chrysler was going to make it, and survive
bankruptcy... except for this little muffler/production problem.

With the low price appeal (4 Sno-Runners could be purchased for
the whole family for the price of one large sled from any other
competitor) really "sold" dealerships also.  This would really
increase sales for them.  A couple large dealers in the Rocky
Mountain tourist areas purchased on the order of thousands of
Sno-Runners.  The key here: mountains.  Due to the thinning air
at high altitudes and the restrictive mufflers, the bikes
couldn't even move out of their own way - they were now down to
about 30% of their original power capability up in the
moutnains.  The dealers quickly denied shipments of the bikes
and cancelled orders like mad.  And sadly, so ends the story of
the Sno-Runners.

Here are more pics from Mr Quick whose father was on the design team with Chrysler. 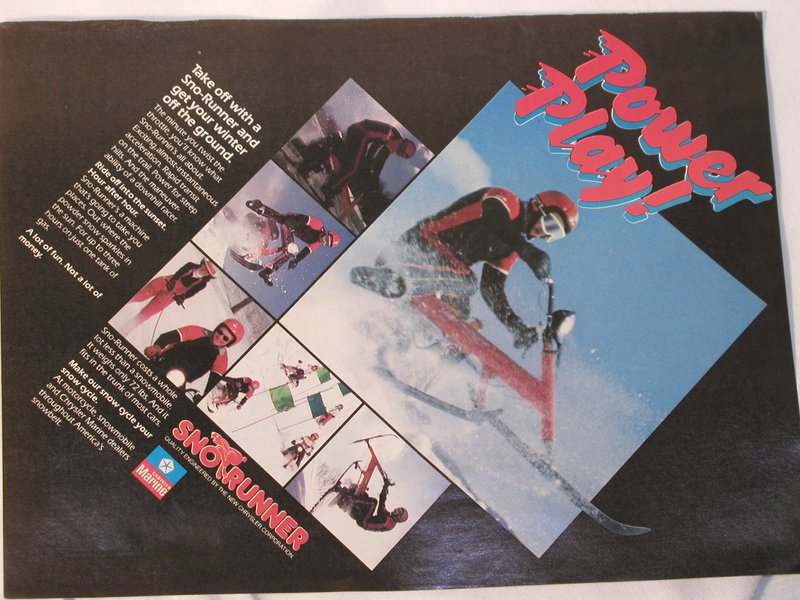 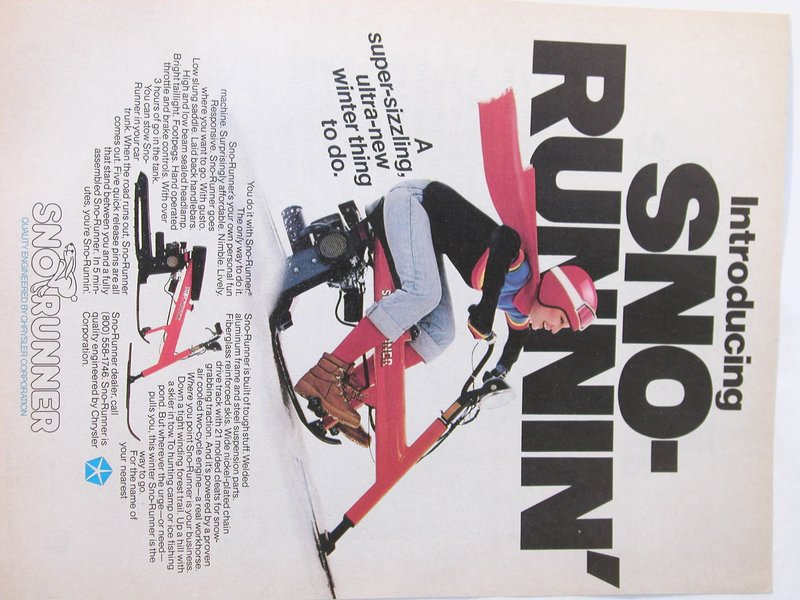 Here are some pics of Sears trying to copy Chrysler, This is a very rare test mule Sears Sno-cycle xs22. I believe these were from the late 70's early 80's. I bought this a few years ago from a woman who lived down the street and was getting ready to move. Her husband had recently died and she was selling some of his items off. She told me he worked for Sears and his division dealt with motorized outdoor sports(motorcycles, minibikes, scooters etc). Sears had wanted to get in on the snow craze and wanted something like the Chrysler Sno Runners. So they came up with the XS22. The machine in the background(not included in this listing) is a "stock" Sno-cycle. From what I was told they had issues with the handling on them during testing(people got hurt). So the one I am selling was a test mule for them to come up with a safer one. As you can see it has a much wider and longer track on it. It also has a different motor on it. It has early 80's trail registrations as he used to test in on the Illinois trails and reserves. It also has a different serial # tag on it as well. It is a smaller brass one, where the other bike has a large production type of tag.It also has a headlight/taillight an hour meter etc.  Front pegs fold out of the front fork area to rest your feet on once up to speed. What I was told is the program never did get off the ground and was scrapped, but not before a certain amount were produced, she thought it was around a dozen or so and that they ended up in the hands of a couple of the guys who were involved in the program.